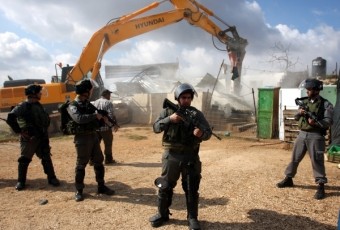 [Friday September 20, 2013] Dozens of Israeli soldiers invaded Khirbit Makhoul village, in the West Bank’s northern plains area, and removed tents and structures for the third time.Aref Daraghma, head of the Wadi Al-Maleh Village Council, stated that the soldiers removed all tents installed by the Red Cross for the families that lost their homes and structures in previous attacks.

Daraghma added that 10 families said that they ‘will not bow to Israeli oppression, and will stay in the area despite the ongoing Israeli violations’, the Palestine News Network (PNN) has reported.

On Monday at dawn, the army invaded the small village, inhabited by Bedouins, and removed various structures and tents used by the residents.

The small village is located between a group of illegal Israeli settlements, and is also close an Israeli military base in the Jordan Valley.

Palestinian Bedouins have faced decades of repression and forced removal by Israeli authorities as a result of this refusal to recognize their legitimate claim to continue to live on their ancestral land.