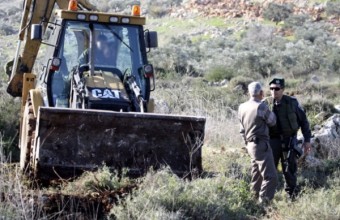 Israeli authorities razed a land near Solomon’s Pools, in the village of Artas , south of Bethlehem.Last week, Israeli authorities evacuated a military watchtower that was built on the land, to return yesterday and start razing the 102 dunums of Palestinian land, belonging to Abu Sway family, the PNN has reported.

In a different context, Israeli occupation forces served, on Thursday, residents in Ethna village, west of Hebron, with notices to stop construction on their lands.br />

Mayor of Ethna municipality, Hashem al-Tumaizi, said that the village is always exposed to Israeli demolitions and harassments, adding that the policy which is implemented by the Israeli authorities aims at deporting residents from their homes.br />

Al-Tumaizi called on the governmental institutions and international community to protect and support these areas.