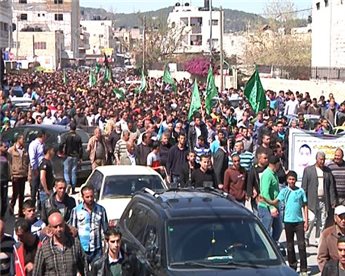 Over 10,000 Palestinian mourners, on Saturday, marched behind the coffins of three militants who were shot dead by Israeli forces overnight, in Jenin refugee camp.Palestinians marched from Jenin’s public hospital to its largest mosque, carrying the bodies of Hamza Abu al-Haija, 22, Mahmoud Abu Zeina, 17, and 22-year-old Yazan Mahmoud Basim Jabarin.

After performing the funeral prayer, the mourners marched to Jenin camp’s cemetery led by officials of the PLO, the Palestinian Authority, Fatah, Hamas, and Islamic Jihad, Ma’an reports.

During the procession, mourners shouted slogans urging Palestinian militants to take revenge and calling on the PA to immediately end peace negotiations with Israel and focus instead on reconciliation between Fatah and Hamas.

Masked Palestinian gunmen at the front of the crowd of thousands fired gunshots in the air, expressing rage and readiness to retaliate against the Israeli army.

A spokesman for Palestinian president Mahmoud Abbas denounced the killings, describing them as part of ‘systematic Israeli policy aimed at destroying everything.’

Nabil Abu Rdeina said that Israel escalated its ‘attacks against citizens.’ He urged the US administration to take action before peace talks collapsed.