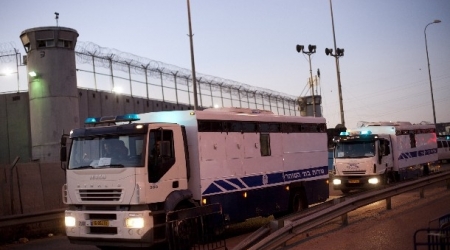 The National Committee for Planning and Building, in the Israeli Ministry of Interior, has approved the expansion of Megiddo prison to hold 6,000 prisoners.According to Haaretz, the committee cancelled a former system which stated that every single prisoner must have a cell of 6.5 square/meters, Al Ray reports. However, every prisoner now has only a cell of 3.5 square/meters.

Planning and building systems in Israel, 30 years ago, allotted every prisoner 6.5 square/meters of movement. The total number of the prisoners was not to exceed 400 prisoners per prison.

By Israeli law, prisons and public facilities must be five dunams or more, in addition to 7 dunams factories. (One dunam is approximately 1/3 of an acre.) However, IPS does not apply the law.

Megiddo Prison is based in historic Palestine, a few hundred meters south of Tel Megiddo, or Har Megiddo, known to Christians worldwide as ‘Armageddon’. (A ‘Tel’ is a hill created by many generations of people living and rebuilding on the same spot.)

In 2005, archaeologist Yotam Tepper, of Tel-Aviv University, discovered the remains of a church which is believed to be from the 3rd century, a time when Christians were still persecuted by the Roman Empire.

The artifacts were found inside of the prison. It is the site of the oldest known church in the Holy Land and, possibly, the world, depending upon how one defines ‘church’; an inscription inside the church mentions a Roman officer, ‘Gaianus,’ who donated ‘his own money’ to have a mosaic made.

Anthropologist Joe Zias said of the discovery, ‘My gut feeling is that we are looking at a Roman building that may have been converted to a church at a later date.’

Article 47 of the Fourth Geneva Convention explicitly states that “protected persons accused of offences shall be detained in the occupied country, and if convicted they shall serve their sentences therein.”