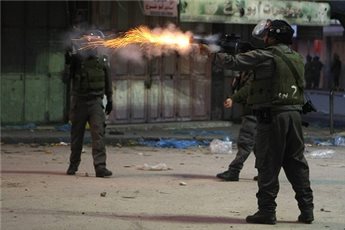 ‘Israeli forces have displayed continuing recklessness in their use of force against Palestinian protesters when they killed a young man and a teenager, and injured others, during a crackdown on demonstrations to commemorate the Nakba in the occupied West Bank today,’ a statement from the organization said.

Ma’an reports that the rights group has expressed that the use of ‘unnecessary and excessive force’ against Palestinian protesters is unacceptable and must be stopped immediately.

‘The Israeli authorities must ensure that their forces act in a manner that respects and upholds human rights. Amnesty International is calling for a prompt, independent, and transparent investigation into these deaths and injuries,’ said Director of the Middle East and North Africa Programme at Amnesty International, Philip Luther.

Furthermore, in February, Ma’an reports, Amnesty released a report entitled ‘Trigger-happy’, in which Israel’s ‘callous disregard’ for human life was cited, in addition to their near total impunity for the killing of Palestinian civilians in cases examined since 2011.

The report also said that some of the killings, including that of Samir Awad, age 16, in Jan. 2013, could be considered war crimes.