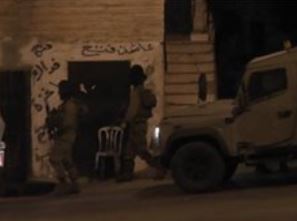 [Sunday at dawn, May 18, 2014] Israeli soldiers invaded various Palestinian communities in the Hebron district, in the southern part of the occupied West Bank, and kidnapped at least six Palestinians, including two brothers.Local sources have reported that the soldiers violently broke into various homes, and searched them before questioning several Palestinians, kidnapping at least six.

According to the Ma’an News Agency, the soldiers kidnapped Qusai and Odai Sa’id Nassar, from their home in Hebron city, Moath Idrees Ammar and Ammar Ziad Rawasha from the as-Sammoa’ town, former political prisoner Mohammad Nizar at-Teety from the al-Fawwar refugee camp, and Mo’taz Obeido from Hebron city.

Soldiers also invaded Beit Ummar town, north of Hebron, broke into and violently searched several homes, and handed several young Palestinians, military warrants ordering them to head to the Etzion military and security base for interrogation.

Media spokesperson of the Popular Committee against the Wall and Settlement in Beit Ummar, Mohammad Awad, stated that the soldiers topped several buildings while searching them.

Awad added that the soldiers smashed the front door of a home, and searched it for more than an hour in an attempt to locate a Palestinian identified as Omar Ahmad Awad, 28, but he was not at home.

The soldiers handed the family two warrants ordering Omar and his brother Yousef, 31, to head to the Etzion base for interrogation.

They also invaded the home of Khaled Ayyad Awad, 40, confiscated his permit to work in Israel, and ordered him to head to Etzion for interrogation.

The invasion led to clashes between the soldiers and local youths, no injuries were reported.