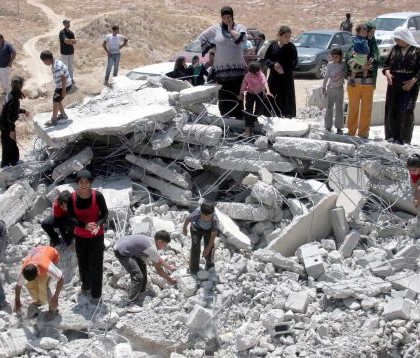 [Sunday, May 18, 2014] Several Israeli military jeeps, accompanied by a military bulldozer, invaded Tel Romedia area, in the center of the southern West Bank city of Hebron, where they demolished a wall surrounding a Palestinian home, and uprooted a nearby Palestinian land. Resident Feryal Abu Haykal told the Palestinian News & Info Agency (WAFA) that personnel of the so-called “Israeli Department of Antiquities” accompanied by several Israeli jeeps surrounded her father’s home, and demolished its wall.

She added that the army also uprooted farmland belonging to her father, and informed the family that the digging is part of “archaeological excavations”.

Abu Haykal told WAFA that the soldiers also wanted to uproot and confiscate a thousand-year-old olive tree, in her father’s yard, but the family managed to save it.