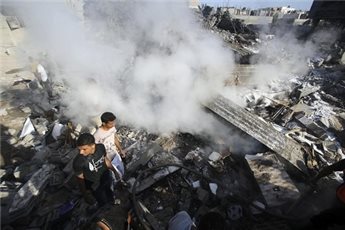 Al-Qassam Brigades spokesman Abu Ubaida said over television, on Wednesday, that Israel had ‘failed’ in its assault on the Gaza Strip, and called upon the Palestinian negotiating team in Cairo to return home.The speech came just following a series of Israeli airstrikes which killed at least 22 Palestinians over the course of the day, including the wife and child of Hamas military chief Muhammad Deif, after a temporary ceasefire unraveled late Tuesday.

Israeli media sources said that the army intended to assassinate Deif, and bombarded the home despite the fact it failed to locate Deif, and did not know whether Deif was there in the first place.

‘We tell Israel: you have failed. All you can do is kill children and women. You have failed in all your missions…

‘Muhammad Deif will enter Jerusalem as the head of the liberating army.’

Abu Ubaida warned international airplanes not to use Ben Gurion Airport, in Tel Aviv, and also warned Israelis against gathering in large numbers, as the al-Qassam Brigades intended to renew rocket fire on Israel.

He additionally warned Israelis living near Gaza not to return to their homes.

During the course of the speech, five rockets were reportedly fired into Israel, Ma’an stated. According to the Israeli military, all were intercepted, including one above Tel Aviv, two above Beersheba, and two above Ashkelon.

Furthermore, Abu Ubeida called upon the negotiating team in Cairo to give up on the ongoing talks with Israel, following repetitive stalling on the part of Israel who has failed to come to reasonable terms with resistance demands.

The demands are in line with the Oslo Accords, agreements which the Israeli regime has continuously violated upon the democratic election of Hamas, who it continues to insist is a terrorist organization.