Triplegic Detainee To Be Released In February 2015 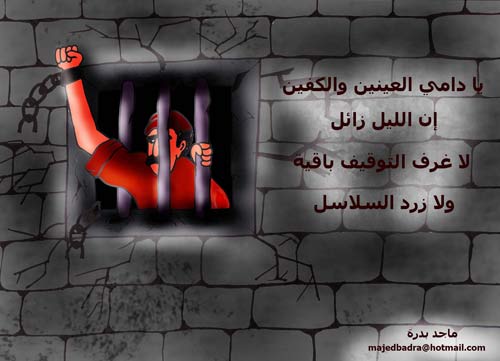 The Ofer Israeli Military Court has decided that detainee Abdullah Mheisin, held under arbitrary Administrative Detention, would be released on February 17, 2015. Two detainees forced into solitary confinement.The Palestinian Prisoners Society (PPS) has reported that Mheisin suffers from Triplegia, and has been imprisoned under two consecutive Administrative Detention orders since his abduction in mid-June 2014.

The PPS said the detainees suffers from several infections, a deteriorating health condition, and that he fell off his wheelchair while being held at the Etzion military base shortly after his arrest.

He is currently at the Ramla Prison Clinic that lacks specialized physicians, basic medical equipment and supplies.

In related news, head of the Detainees Committee of the Palestinian Authority Issa Qaraqe’ stated that the Prison Administration in Eshil forced two detainees, identified as Naji Zghayyar and Adnan Rajabi, into solitary confinement until further notice.

Several detainees were later transferred to different detention facilities as a form of collective punishment against them and their families.

In related news detainees Eyad Abu Nasser, 45 years of age, from Gaza, is currently facing various health complications, including a blood diseases that is affecting his liver.

Abu Nasser underwent a surgery when the doctors removed his spleen, and faced complication, especially since the surgeons did not remove the stitches after his wound healed.

He was moved into surgery again in 2010, and continued to suffer from ongoing infections and complications.
He was recently moved from Hadarim Prison to the Ramla Prison clinic for a checkup, despite the fact that the clinic lack basic equipment, supplies, and specialized physicians.

On Thursday, the Ofer Israeli military court sentenced detainee Islam as-Sinnawi to 16 months imprisonment and a 2000NIS fine, and Nizar Taqatqa to 18 months and twelve days, in addition to 2000NIS fine.