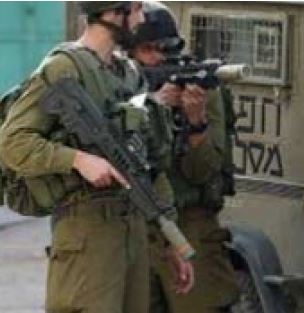 Two young Palestinian men have been kidnapped, on Sunday at dawn, in the southern West Bank district of Hebron, while several others received military orders for interrogation, after dozens of soldiers invaded various communities in the district.Local sources in Tarqoumia town, near Hebron, stated that the soldiers invaded it, searched homes, and kidnapped Mohammad Ziyad Jaâ??afra who suffers from a mental condition.

Damage was reported to a number of cars, including the car of Wael Awad al-Batran, 32, who was driving with his family; his children suffered anxiety attacks.

Soldiers also invaded a neighborhood in Hebron city, installed roadblocks at the entrance of Saâ??ir and Halhoul towns, before stopping and searching dozens of cars, and interrogated the passengers while inspecting their ID cards.

Spokesperson of the Popular Committee against the Wall and Settlements in Beit Ummar town stated that the soldiers invaded Safa area, north of the town, broke into the home of Sheikh Mahmoud Mohammad Shobaki, and kidnapped his son Soheib, 22.

Awad added that the soldiers also invaded the home of Nasser Hasan Abu Hashem, 48, and handed his sons Halim, 24, and Hamza, 20, military orders for interrogation at the Etzion base.

Local sources said the soldiers also kidnapped a lawyer, identified as Ibrahim Nawwaf al-â??Amer, after ransacking his home, and confiscated his mobile phone, some cash, and his camera.

In related news, soldiers kidnapped a young man, 18 years of age, after the army and police attacked protesters in Tayibe city, in historic Palestine, during a protest against the police fatal shooting of Kheir ed-Deen Hamadan, 22, in Kafr Kanna village, in the Galilee. http://www.imemc.org/article/69648

The police said it â??suppressed a protest at the entrance of the town,â? and clashed with local youths who burnt tires, and blocked the main road.