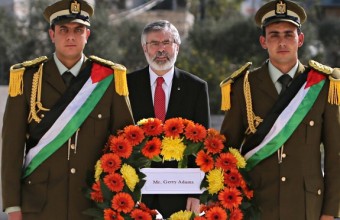 The Irish Journal, on Friday, reported that Israel has denied leading Irish politician Gerry Adams permission to enter Gaza. According to the PNN, Adams, president of the Catholic Sinn Fein party, is currently on a three-day tour of Israel and Palestine. He had reportedly been invited to visit Gaza by UNRWA.

Adams declared, in response: ‘Preventing me from travelling to Gaza and talking to those citizens who have survived three Israeli assaults in the last decade, and who are besieged and in need of massive aid to rebuild their shattered economy and society, runs contrary to the needs of a peace process and is very unhelpful.’

‘That campaign has seen some success in recent months and next month it will be debated in the European Parliament,’ the official added.

Mr. Adams said that he had raised the issue of the recognition of a Palestinian state with the Irish prime minister in the Irish parliament, known as the Dáil, last week.

The people of Palestine have ‘the right to national statehood,’ he stressed.

The Irish politician met, this past Thursday, with PA President Mahmoud Abbas in Ramallah and with Labor Party leader Isaac Herzog.