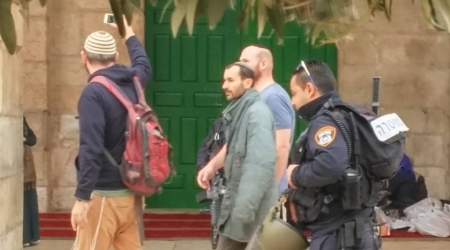 Dozens of Israeli settlers, Tuesday morning, again stormed al-Aqsa mosque compound under the protection of Israeli special forces and soldiers.Media official at the Al Aqsa Foundation for Waqf and Heritage, Firas Debs, said that over 21 Israeli settlers entered the compound in groups and wandered its yards, explaining that the settlers attempted to perform Talmudic rituals, but that worshippers confronted them.

Mr. Debs further noted, according to Al Ray, that Israeli forces beat the two guards, Muhannad Idris and Ashraf Sharbati, when both tried to stop the storming, pointing out that hundreds of worshipers were in the mosque since morning.

Israeli police asked women to hand over their identity cards and are reportedly still holding them.

The Foundation for Waqf and Heritage warned in a press release, Monday, of an ‘e-mobility’, led by a so-called ‘coalition’ of organizations representing the Temple Mount, to prompt the largest possible number of Jews to participate in a mass storming of the holy site, on the eve of the so-called Festival of Lights (Chanukah), which marks 17 of this month.

The coalition further announced that the 14th and 21st of December are going to be the two dates for ‘the big break’, in support of Knesset deputies who demand the right of Jews to enter the Mosque at any time and without restriction or condition.