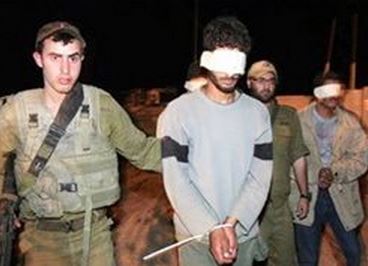 Israeli soldiers kidnapped, on Saturday evening, four Palestinians during clashes that took place in the at-Tour town, in occupied East Jerusalem, after dozens of soldiers invaded it. Two Palestinians kidnapped in northern West Bank.Media sources said dozens of soldiers invaded the town, and clashed with local youths who hurled stones and empty bottles at them, while the soldiers fired gas bombs, concussion grenades and rubber-coated metal bullets.

The army then detained, and violently assaulted several young Palestinian men before kidnapping four of them, and took them to an interrogation center in the city. Two of the kidnapped have been identified as Fadi Talal Sayyad, and Omrat Rabay’a.

The sources said the soldiers searched a Palestinian car, and allegedly located two M16 rifles, adding that one of the Palestinians tried to escape when the soldiers found a bullet in his car, and kidnapped him after firing a few rounds of live ammunition into the air.

According to the army, the soldiers searched the car, located the M16 rifle, and took the two to an interrogation facility.