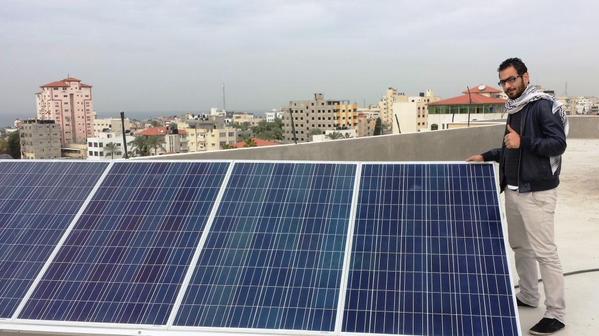 Gaza is in desperate need of power. One organization hopes to bring clean, renewable energy to Gaza with the installation of solar panels.Over the past few months an international team of humanitarians have been organizing a project which would bring solar power to Gaza. Gaza engineer, Naji Abu Shaaban, along with his group of engineers in Gaza have been working around the clock to make this solar project a reality.

Outside of Gaza are a number of supporters of this project which include internationally recognized artist, Martha Tjoe Nij, who has supported the project from her home in Suriname. A Turkish webmaster, Hatice, volunteered her time to create a website for the Solar Gaza project, which has evolved from #SolarGaza when it was started on Twitter as an idea, to its new official title Solar Gaza Lights.

The goals of the project are aimed specifically at solar power restoration of electricity for the most needy in Gaza. The organization has teamed up with the Jerusalem Development Fund’s office in Gaza to help with alleviating electricity shortages by donating solar power units. The project also intends on creating employment opportunities for project engineers in Gaza. Utilizing local talent is part of the strategy the group decided on from the beginning.

The group is looking to create partnerships with individuals, groups, and organizations who can assist with getting solar units installed, helping get the units imported into Gaza, assisting with funding of these projects, and publicizing the organization around the world.

Following Israel’s devestating attack on Gaza in the summer of 2014, a health crisis was created when hospitals lost electricity, while the Israeli blockade continues to create a shortage of medical supplies and medicines. In addition to those issues, shortages of electricity are causing immense problems not just in hospitals, but in the lives of the people of Gaza. Some areas of Gaza are experiencing power cuts stretching up to 48 hours at a time. Abu Shaaban says that living under these conditions, ‘is unacceptable and a crime against humanity.’