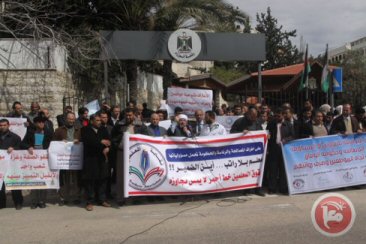 Civil servants hired by Hamas leadership in the Gaza Strip went on strike across all Gazan ministries and public institutions, excepting schools, on Tuesday.The employees have not received regular pay since the unity government came together in June of last year, although, even before this, Hamas struggled to pay their salaries with any regularity.

According to Ma’an News Agency, a committee representing the unpaid civil servants issued a statement on Tuesday, claiming that the strike came in response to the unity government’s ‘recklessness’ towards the employees’ rights.

It accused the unity government of acting fraudulently and said ministers were ‘completely void of any practical steps towards the inclusion of former employees.’

The statement added that schools had been exempted from the strike due to students’ final exams.

The employees’ status has been one of the major points of dispute between Hamas and the unity government since the government of politically-independent technocrats was formed last year.

Hamas has demanded that the government regulate the salaries of its 50,000 employees who have been employed since the movement seized power in the tiny enclave in 2007.

They took over from 70,000 employees of the Palestinian Authority who were forced out of their positions but have still been receiving their salaries.

However, the unity government has pledged to return the 70,000 former employees to their positions, saying that the Hamas workers would only be hired ‘according to need’.

Since the consensus government took office in June 2014, only around half of the Hamas employees — all of them civil servants — have received any money: a one-off payment of $1,200 at the end of October.

The rest, who are employed in security, have not received any salary payments in almost 11 months.

A high-profile delegation of eight government ministers crossed into Gaza in April in the hope of solving the dispute, but the visit ended in disarray after the ministers allege that Hamas prevented them from leaving the hotel to carry out their work.

The following week, Minister of Labor Mamoun Abu Shahla told Ma’an that the unity government had cut off contact with Hamas in the wake of the visit.

See also: No Real Sign of Reconciliation between Fateh and Hamas

Carter: ‘We will push to apply Fateh and Hamas agreements’