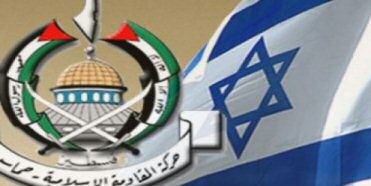 Hamas officials are expecting that it will soon be possible to extend the temporary truce with Israel to a period of 5 years, according to a proposal laid out by Qatar which includes an easing of the Israeli siege on Gaza and the establishment of a floating seaport off the coast.Hamas leader Khalil al-Haya said: “Talks on a truce depend on the public opinion.”

Local news sources had said, according to the PNN, that Hamas’ proposal presented an offer of a truce with Israel in return for a seaport and an airport, and peace extending at least 5 years via Western diplomatic mediation.

UN Envoy to the Middle East, Robert Serry visited Swiss Consul Paul Greening in the Gaza Strip more than once, and the two officials met with a number of Hamas leaders such as Vice President of the Political Office Mousa Abu Marzouq, Basem Na’im and Ghazi Hamed.

Israeli media sources quoted what they called ‘documents’ as confirming that Hamas’ offer proposes a truce lasting between 3 and 5 years based on Western diplomatic mediation.

Hebrew news site Walla said that the ‘communiques and documents from Hamas concerning the truce proposal were delivered to Israel by Western diplomats’.

The news site added that Hamas was based in the Gaza Strip and ‘living in conditions more difficult than ever’.

Walla indicated that Hamas had also proposed a truce lasting up to 15 years, but had rescinded this proposal and instead reached out to Western diplomats for their approval on a 5 year truce. The truce includes the halting of all military operations above and below ground in return for an Israeli commitment to respecting the ceasefire, as well as an easing of the siege on Gaza, allowing the import and export of goods, the establishment of a sea port and the rehabilitation of the Yasser Arafat International Airport located between Rafah and Dahaniya close to the Egyptian border.

According to the Israeli news site, Middle East Quartet Envoy Tony Blair presented a document in English to Hamas, via the Working Men Group in Gaza, which guarantees the establishment of a Palestinian state along the 1967 borders with Jerusalem as its capital and the right of return.