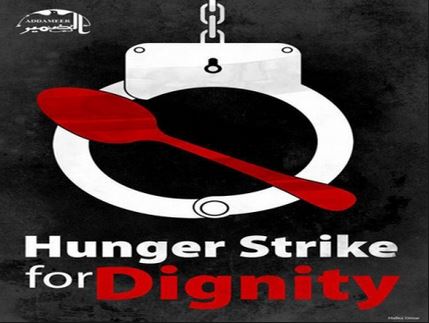 After the Israeli Knesset passed an amendment on July 30 allowing the force-feeding of hunger-striking Palestinian political prisoners, the Medical Committee in Soroka Israeli Hospital has granted, on Saturday evening, the doctors in charge of Mohammad Allan’s case, to force-feed him should they determine he could lose his life.The Maan News Agency said that the spokesperson of the Soroka Israeli Hospital in Beersheba (Be’er as-Sabe’) told their reporter that the committee, headed by a retired judge, has decided to grant a green light to the doctors to force-feed ‘Allan, who started his hunger strike 55 days ago, protesting his illegal Administrative Detention, without charges or trial.

The head of the Palestinian Detainees Committee ‘Issa Qaraqe’, Palestinian Prisoners’ Society head Qaddoura Fares and the Palestinian Health Minister, Dr. Jawad ‘Awwad, held a press conference at the Palestinian Ministry of Health in Ramallah, on Saturday evening, and warned of the consequences of force-feeding ‘Allan, or any other hunger striking detainee.

Qaraqe’ said the Israeli Law, allowing force-feeding the striking detainees, and all Israeli violations against the detainees, must be filed to the International Criminal Court without any delay.

He also held the Israeli government, and its head Benjamin Netanyahu, responsible for the life of ‘Allan, who is currently facing a serious health condition, and that any attempt to force-feed him could end his life.

‘Allan is a lawyer from Einabous village, south of the northern West Bank city of Nablus; Israeli soldiers kidnapped him in November of 2014. Since then, ‘Allan has been held under consecutive arbitrary Administrative Detention orders without charges or trial, each order for six months.

Qaraqe’ also stated that Israel’s laws and decisions were a series of serious violations, not only of International Law and of the Fourth Geneva Convention, but also violate the basic medical ethics.

The Palestinian Detainees Committee has reported, on Saturday evening, that dozens of detainees have launched an open-ended hunger strike, dozens expected to join on Sunday, and likely hundreds will join the strike, in the coming days.

The Committee further stated that dozens of detainees in the Negev Detention Camp, Eshil and Ramon Prisons, have decided to start their strike on Sunday.