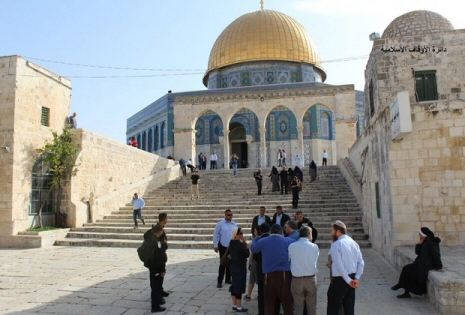 Israeli forces confiscated, on Sunday morning, a strip of land adjacent to the eastern wall of Al-Aqsa Mosque, near the Golden Gate.Director of Wadi Hilweh Information Centre, in occupied East Jerusalem, Jawad Siyam, said that inspectors from the Israeli Nature and Parks Authority stormed and confiscated land belonging to Al-Husseini and the Al-Ansari families.

The inspectors were escorted by a large number of Israeli troops during the confiscation, Siyam said.

He added, according to Days of Palestine, that security guards from a private security company installed barbed wire fence around the confiscated land.

The Palestinian Authority’s governor of Jerusalem and Minister of Jerusalem Affairs, Adnan al-Husseini, also said that Israeli forces and inspectors stormed the land without prior notice.

He highlighted that the strip of land was about 7,000 metre square (1.7 acres) in dimension.