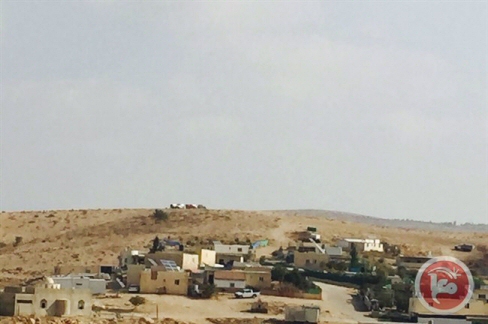 Israeli excavators, on Sunday morning, began work on the infrastructure of two Jewish-only settlements in the former Bedouin village of Umm al-Hiran, in the Negev desert, southern Israel, according to locals.Locals told Ma’an News Agency that excavators and bulldozers were building a new road under heavy protection of Israeli forces.

In November of 2013, the Israeli government approved a decision to demolish the unrecognized Bedouin village of Umm al-Hiran and passed plans to create two Jewish settlements, Hiran and Kassif, in the area.

‘There is no room for comments any more as we are not talking about racism, but rather, extermination of a 60-year-old town whose residents have been displaced three times,’ a member of a local committee of the displaced Bedouin community, Raed Abu al-Qean, said.

Umm al-Hiran is one of dozens of Bedouin villages which the Israeli government does not recognize. It is located in Wadi Attir east of Hurah village.

A Palestinian member of the Israeli Knesset, Talab Abu Arar, described the Israeli decision as ‘racist’.

‘Racism has become crystal clear in Umm al-Hiran as a Jewish settlement Hiran is being built on the ruins of the Arab Umm al-Hiran village.’

He added that Israeli courts and authorities ignored the rights of Palestinians and worked towards confining them to a few recognized towns and denying their rights.

Abu Arar compared the activities in Umm al-Hiran to the forced displacement of more than 700,000 Palestinians from their homes in 1948 prior to the creation of the state of Israel.

The Higher Guidance Committee of Arab Residents of Negev is scheduled to convene and decide on practical moves in protest against the construction of Jewish settlements in Umm al-Hiran. Palestinian members of the Knesset are also set to join the meeting.