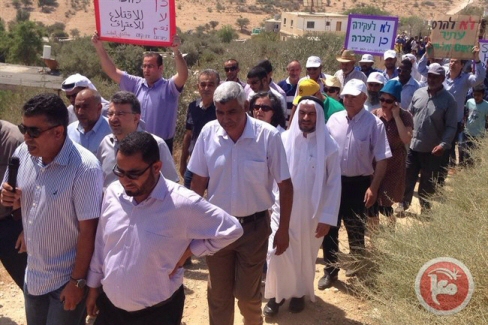 Dozens of Palestinians protested on Thursday, in the Bedouin village of Umm al-Hiran near the town of Hura, in the Negev, as Israel’s construction of a Jewish town on the village’s land continues, local sources said.The Umm al-Hiran community — around 700 strong — is unrecognized by the Israeli government and residents’ lands were claimed by the state in 2013 in order to make way for the expansion of the Beersheba metropolitan area.

As a march set off from the village and moved towards the site of construction, protesters said they were able to force Israeli police to remove the bulldozers from the area.

Leaders and members of national and Islamic parties, Palestinian members of the Knesset, members of committees for Palestinians in the Negev, and Jewish-Israelis took part in the march.

Sources told Ma’an News Agency that the contractor responsible for razing the village is a Palestinian citizen of Israel from the Negev, and locals have condemned the use of Palestinian contractors against their people by the Israeli authorities.

Participants of Thursday’s demonstration called for launching an international media campaign in support of Umm al-Hiran and other villages threatened with land confiscation in order to pressure Israeli authorities to stop longstanding policies to displace Palestinian Bedouins.

Umm al-Hiran residents are a fraction of the thousands of Bedouins living in villages that the Israeli government does not recognize and are at risk of displacement in the Negev due to Israeli policies that critics argue amount to ethnic cleansing.

The community’s residents appealed their displacement in court earlier this year on the grounds that the Israeli military administration ordered the community to be moved to the area in 1956, but the appeal was rejected.

‘Racism has become crystal clear in Umm al-Hiran as a Jewish settlement Hiran is being built on the ruins of the Arab Umm al-Hiran village,’ Abu Arar told Ma’an on Sunday.

He added that Israeli courts and authorities ignored the rights of Palestinians and worked towards confining them to a few recognized towns and denying their rights.