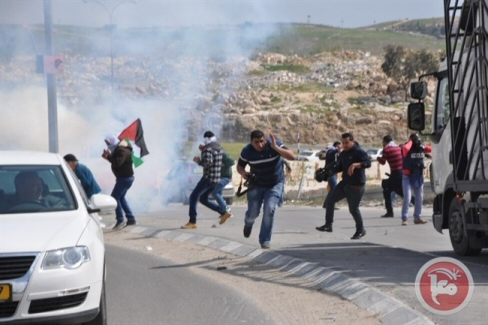 A number of Palestinians were shot and injured by Israeli soldiers, with both rubber-coated metal bullets and live ammunition, in clashes which broke out between Friday and Saturday, across the occupied West Bank. In Nablus, a Palestinian man was shot dead by an unknown assailant during a brawl at the Askar refugee camp.Israeli forces shot four young Palestinian men with rubber-coated steel bullets and an elderly man suffered from tear gas inhalation during clashes early Saturday morning in the northern West Bank village of Tell, south of Nablus, Palestinian security sources told Ma’an News Agency.

Palestinian security sources said that several Israeli military vehicles stormed the village of Tell at 1 a.m. on Saturday morning before local youths responded to their presence and clashes broke out.

The security sources, as well as locals, said young Palestinian men threw stone and empty bottles at the the intruding soldiers, who then fired stun grenades, tear-gas canisters and rubber-coated steel bullets at the young men.

The sources said Israeli forces hit 19-year-old Amir Basil al-Hindi with a rubber-coated steel bullet in the head, Yahya Abdul-Karim, 21, in the hand, Anas Yousif Hamdi, 21, in the foot and Ahmad Abdul-Fattah Asidi, 21, in the thigh.

The source highlighted that several people suffered from tear-gas inhalation, including Adnan Khalid Ramadan, 65, who needed medical treatment because of the gas.

Israeli forces have injured 1,307 Palestinians in the occupied Palestinian Territory since the start of the year, with an average of 39 Palestinians injured every week, according to documentation by the UN Office for the Coordination of Humanitarian Affairs.

WAFA further reports that three Palestinians, including two children, were shot and injured with live ammunition, while many others suffocated during clashes that broke out with Israeli soldiers in the town of Silwad to the east of Ramallah late Friday night, according to local sources.

Sources said that Israeli army fired banned ‘Tutu’ and rubber-coated steel bullets, as well as tear gas canisters at the town’s locals, shooting three with live ammunition. They were transferred to hospital for medical treatment, where they are expected to undergo surgeries.

Six other locals were shot and injured with rubber-coated bullets, causing them light injuries. They were all treated at the scene.

The clashes also led to the suffocation of dozens others due to tear gas inhalation.

An increasing number of unarmed and peaceful Palestinians were either killed or seriously injured as a result of Israel’s constant use of tear gas against them.

In early December of 2014, a Palestinian minister without a portfolio, Zeyad Abu Ein, died due to tear gas inhalation and after being directly hit in the chest by an Israeli soldier during a peaceful protest marking the United Nations International Year of Solidarity with the Palestinian People. He was transferred to hospital where he was pronounced dead shortly afterwards.

On December 2011, Mustafa Tamimi, 28 from Ramallah’s village of Nabi Saleh, died from critical wounds he sustained when an Israeli soldier fired a tear gas canister directly at his head from a short distance.

B’Tselem, the Israeli human rights information center, stated that “[Israeli] soldiers and Border Police often fire tear-gas grenades directly at demonstrators with the aim of hitting them, or fire carelessly, without ensuring that demonstrators are not in the direct line of fire, in direct contravention of regulations.”

The legal center, in a summary report published in 2013, demanded that Israeli security forces “completely prohibit the firing of 40mm tear-gas canisters either directly at individuals or horizontally, in a way that could cause result in injuries.”

To be noted, Tutu bullets are banned under international law but occupation forces continue to use it.

According to media, Tutu bullets are classified by Israeli army as non-lethal weapon. However many Palestinians were killed due to being shot by Tutu bullets.

Near Nablus, in the northern West Bank, a Palestinian man was shot dead and six others were injured Saturday morning during a brawl, Palestinian officials told Ma’an.

Palestinian security sources said 37-year-old Samir al-Nadi was shot in the head during a brawl in Askar refugee camp east of Nablus. He was evacuated to Rafidia Hospital in the city where he was pronounced dead shortly after he arrived.

Six other men were moderately injured during the same brawl, and were taken to the hospital.
Police said the main suspect in the shooting death had not yet been detained.

Separately, a Palestinian man was shot and injured on Saturday morning by an unidentified gunman in the village of Qusra, near Nablus.

Security sources said the victim was hit in the upper extremities and was evacuated to hospital. Medics said his injuries were moderate to serious.

Last month, 12 Palestinians were shot and injured during an armed clash between two families in the northern West Bank village of Rujeib, east of Nablus.