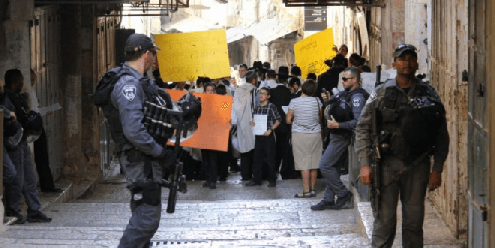 About 43 Israeli settlers and intelligence members barged into the yards of Al-Aqsa mosque, in occupied East Jerusalem, heavily guarded by Israeli police units.Israeli forces abducted one Palestinian near one of the mosque gates.

According to the PNN, the violations come as the Yeshivat Makor Chaim rightist orthodox school called on a wide break-into the mosque this morning, with students and rabbis.

Consequently, Israeli forces prevented female worshipers and Murabits (guards) from entering the mosque, and forcefully displaced them from the mosque surroundings and gates to let the settlers enter at ease.

On a related note, a number of settlers have organized a demonstration on Bab Al-Silsila (Gate) calling on more people to perform Talmudic rituals inside the mosque.

“Women for the temple” organization has also called on an “educational day” to teach about the proclaimed temple-mount, as the temple coalition called on more settlers to barge into the mosque for four days this month.

The situation in Jerusalem has been intense and nervous for the past week, after Israeli attacks and closures of Al-Aqsa mosque.

Dozens of Palestinians were reportedly injured on Friday when Israeli and Palestinian Authority forces suppressed protests across the West Bank amid continuing entry restrictions the Al-Aqsa Mosque compound in Jerusalem.

The clashes are still continuing in cities all over the West Bank.