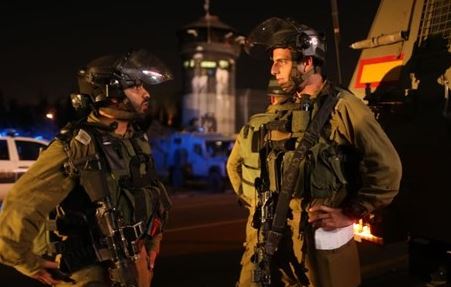 Israeli soldiers kidnapped, late on Saturday at night, six Palestinians, including a father and his son, in Hebron, in the southern part of the occupied West Bank, and the nearby towns of Yatta and Halhoul. Seven Palestinians have been injured in ensuing clashes.The soldiers kidnapped Ahmad Hasan Hneihin and Ala’ Ziad al-Hataba, during clashes that took place between the soldiers and local youths at the southern entrance of Halhoul town, after the army invaded it.

In addition, the soldiers kidnapped Sharifeddin Mahmoud, a student of the Al-Quds University from Yatta.

Many Palestinian villages and towns in Hebron are now completely isolated and separated from each other, while the soldiers continue their home invasions and arrests.