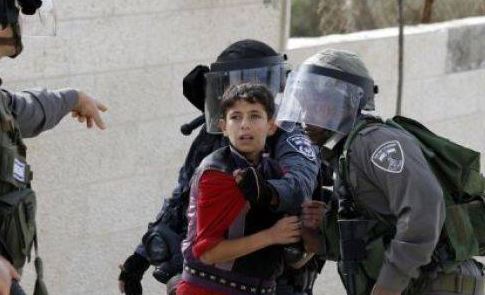 The Palestinian Prisoners’ Society (PPS) has reported that Israeli soldiers have kidnapped, late on Sunday and earlier on Monday, 16 Palestinians in different parts of the West Bank, including a child in Jerusalem.The PPS said the soldiers invaded the towns of Sa’ir and Bani Neim, the al-Fawwar refugee camp, and several other areas in the southern West Bank district of Hebron, and kidnapped ten Palestinians.

The soldiers kidnapped Yazan Emad ath-Thieba, 19, from his family home in the al-Fawwar refugee camp, after searching it, and Suleiman Turki al-Adra, 20, from his home in Bani Neim town, after the soldiers confiscated two cars belonging to his family.

The army also invaded the northern West Bank city of Jenin, stormed and searched many homes, and kidnapped a former political prisoner and a s physically-challenged Palestinian, identified as Adnan Yassin Hamarsha, 48, in addition to Ala Yassin Hamarsha, 22, and Oweis Mazen Nawahda, 22.

In addition, the soldiers kidnapped Rabah Abdul-Fattah Labdi, 29, from Zeta village, in Tulkarem district, while resident Baha’ Abdul-Haq was kidnapped from Nablus, both in the northern part of the West Bank.

In occupied Jerusalem, the soldiers kidnapped a child, identified as Mohammad al-Bayya’, 14, near the main entrance of the Shu’fat refugee camp.

Head of the Village Council Mohammad Atallah told the WAFA Palestinian News Agency that the settlers wrote, “Death To Arabs” on the car, in addition to puncturing its tires, while others raised Israeli flags on trees belonging to Shahin and Abu Swai families in the same area.

Attallah added that the residents face frequent assaults by the settlers in an attempt to force them out of their lands, to illegally annex them to the Gush Etzion Settlement Bloc.