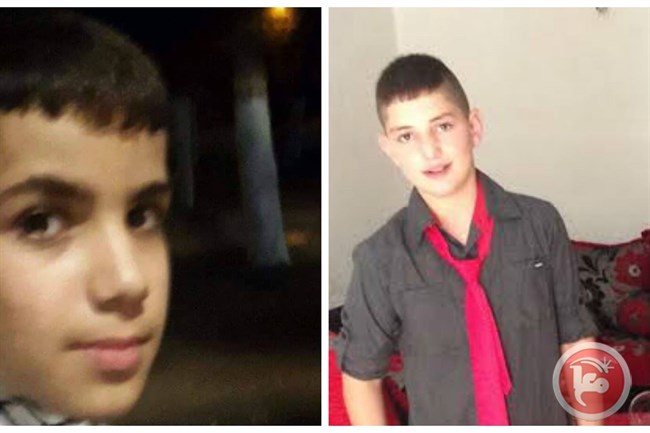 Israeli military prosecutors, on Sunday, charged two Palestinian 12-year-old boys with attempted murder and possession of knives, prisoners’ rights group Addameer said.A lawyer for the group, Muhammad Mahmoud, told Ma’an News Agency that the charges were among those submitted to the Jerusalem central court against Shadi Farrah and Ahmad Zatari, both 12 years of age.

Amjad Abu Asab, who heads an East Jerusalem committee for prisoners’ families, said that both children were detained last Wednesday and were ‘interrogated in the absence of adult family members and lawyers, which is a serious violation of Israeli law and international law.’

Abu Asab added that the Jerusalem central court had also ordered each of the boys’ families to pay a bail of 5,000 shekels and sign a bail of 10,000 shekels.

According to Israeli watchdog Military Court Watch, there were 407 Palestinian children in Israeli custody at the end of November.

That was up from 171 children at the end of September, before a wave of popular unrest swept the occupied Palestinian territory the following month.

Israeli Soldiers Demolish Three Homes And A Barn Near Hebron