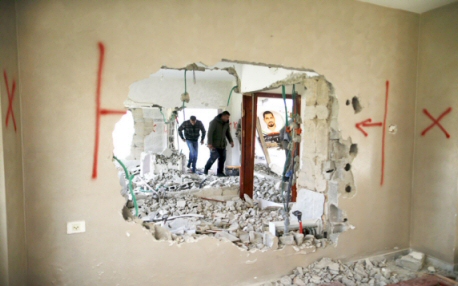 Israeli violations of international law and international humanitarian law in the oPt continued during the reporting period (31 December 2015 – 06 January 2016).Israeli attacks in the West Bank & Gaza:

Israeli forces have continued to commit crimes, inflicting civilian casualties. They have also continued to use excessive force against Palestinian civilians participating in peaceful protests in the West Bank and Gaza Strip, the majority of whom were youngsters. Occupied East Jerusalem witnessed similar attacks. During the reporting period, Israeli forces killed two Palestinian civilians in the West Bank. Moreover, they wounded eight others, including a child. Six of them, including the child, were wounded in the West Bank, while the two others were wounded in the Gaza Strip.

During the reporting period, Israeli forces conducted at least 79 military incursions into Palestinian communities in the West Bank and 5 ones in occupied East Jerusalem. During these incursions, Israeli forces arrested at least 64 Palestinian civilians, including nine children. Twelve of these civilians, including four children, were arrested in East Jerusalem.

In the context of house demolitions, on 04 January 2016, Israeli forces moved into al-Mukaber Mountain village, southeast of occupied Jerusalem. They raided a building in which Safa Abu Jamal and her family live. They took all of them out of the house and detained and attacked one of her brothers. Moreover, they closed the windows with iron and tin plates, after which, they poured concrete into the apartment. Israeli forces claimed that the targeted apartment belongs to her brother Alaa “based on confidential information”. It should be noted that Alaa Abu Jamal was killed by Israeli forces after he carried out a run-over and stabbing attack that resulted in the killing of an Israeli Rabbi on 13 October 2015.

Around the same time, another Israeli force raided a house belonging to the family of Khalil Mohammed Elayan and his sons. They dismissed all the occupants out and destroyed the inside and outside walls of the second floor with hand tools. It should be noted that Baha Mohammed Elayan was killed by Israeli forces after he carried out an attack in an Israeli bus near al-Mukaber Mountain village on 13 October 2015.

As part of settler attacks, on 03 January 2016, some settlers made halls in the walls of a house belonging to Sab Laban family in Aqbet al-Khalediya neighbourhood, in the Old City in East Jerusalem. The family said that they were surprised when they got home and found halls in the children’s bedroom walls. These halls were made by settlers that seized a building belonging to al-Qaisi family adjacent to Sab Laban house the previous month. The settlement organizations attempt to seize the house claiming that they owned it since before 1948.

On 31 December 2015, under the protection of Israeli forces, Israeli bulldozers levelled part of a plot of land belonging to Isma’il Abed Rabbu Shalalda in Sa’ir valley, northeast of Sa’ir village, east of Hebron, in order to establish a military observation post.

On 05 January 2016, Israeli forces confiscated a tractor that was around a house belonging to Adham Abu Maria, who was notified to halt construction works, east of Beit Ommer village, north of Hebron. Moreover, they handed notices over to Khaled Abu Maria and Ghassan Breigeeth for the removal of eight water tanks used in irrigation system.