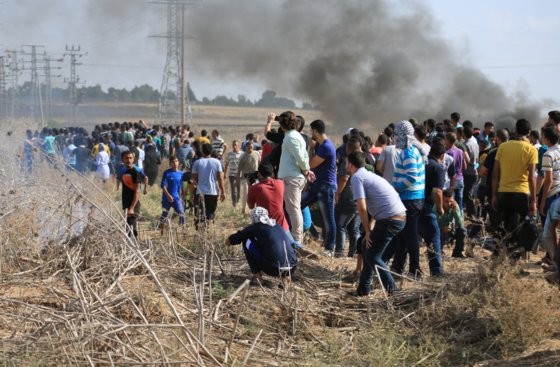 The Palestinian Health Ministry in Gaza has reported, Friday, that Israeli soldiers shot and injured at least 16 Palestinians in border areas, in different parts of the Gaza Strip.The Ministry said eight of the wounded Palestinians were shot with live army fire in their legs, during clashes with Israeli soldiers stationed near the Nahal Oz military base, across the border fence, east of Gaza city. Their injuries have been described as moderate.

It added that two Palestinians were shot, also with live rounds, east of the al-Boreij refugee camp, in central Gaza.

The wounded were moved to the Al-Aqsa Hospital, in Deir al-Balah, suffering moderate wounds, while scores of residents suffered the effects of tear gas inhalation.

In addition, soldiers stationed on towers around the Kissufim military base, east of Khan Younis, in the southern part of the Gaza Strip, also attacked Palestinian protesters, wounding two with live rounds. They were moved to Nasser Hospital in Khan Younis.

Two Palestinians have also been injured near the Beit Hanoun (Erez) terminal, and were moved to Kamal Adwan Hospital, in the nearby town of Beit Lahia, in northern Gaza.