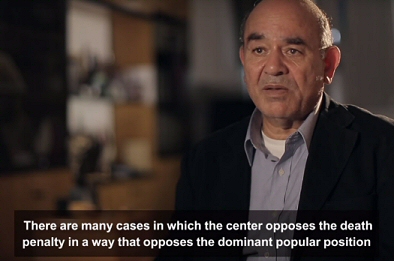 On 22 December 2015, the Palestinian Center for Human Rights (PCHR) published a short film about death penalty showing efforts exerted for years by PCHR to put an end to this punishment. This film was made in conclusion of a series of activities carried out by PCHR as part of the eight-month “Advocacy against Death Penalty” project, during which, PCHR promoted its ongoing efforts to stop this inhumane punishment.The film briefly displayed the quality of those activities. Additionally, it included the legal and logical grounds on which PCHR built its justifications to stop this punishment, especially in light of the internal split in the Palestinian Authority and in the judicial system as well. The film showed PCHR’s activities through interviews with PCHR’s staff members. The activities were in the form of monitoring and documentation, issuance of press releases, leaflets and position papers, holding workshops and having interviews with broadcast and print media.

The film was published in conclusion of the project that started in April 2015, during which; PCHR practiced extra efforts to stop death penalty. The project included several activities, the most prominent of which were: monitoring and documenting death sentences issued in the Palestinian Authority, issuing press releases condemning the ongoing application of death penalty, having broadcast interviews to raise awareness about the importance of putting an end to this punishment. Moreover, PCHR held a series of awareness-raising workshops for lawyers, journalists, university students and civil society activists; in which 504 persons, including 285 females, were targeted.

Furthermore, PCHR launched a number of activities to support the Palestinian poet Ashraf Fayadh, who was sentenced to death in Saudi Arabia because he exercised the right to the freedom of expression. In addition, PCHR launched a letter-writing campaign for calling upon the competent organizations to release Fayadh immediately. To this end, PCHR sent a letter to President Mahmoud Abbas, briefing him on the case, requesting him, in his capacity as a President, to urge the Saudi King to stop the death sentence against Fayadh and to instruct the Palestinian Embassy in Saudi Arabia to offer Fayadh all the legal support he needs. Nonetheless, PCHR called upon all human rights defenders and organizations to pressurize the Saudi government to stop that. PCHR issued a petition signed by local and international human rights organizations, especially allies of Saudi Arabia, to take an action to cancel the application of death sentence against the abovementioned Palestinian poet.

These activities were carried out as part of a project implemented by PCHR in cooperation with the German Federal Foreign Office, complementing years of PCHR’s work on this issue that is a human and moral issue par excellence. PCHR works on this issue out of its deep belief in the right to life as the utmost right granted by God to human beings. Moreover, PCHR believes this prolonged struggle against death penalty will take more years to create a proper societal environment in order to abolish death penalty from the Palestinian legislations.