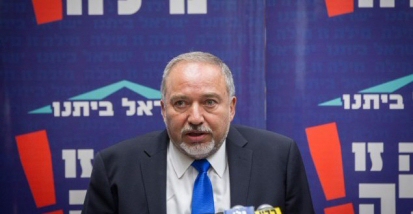 Yisrael Beiteinu party leader, Avigdor Lieberman, on Friday, called Israeli human rights organizations B’Tselem and Breaking the Silence ‘traitors’, stating that the groups were funded by the same people who finance Hamas.According to the PNN, the right-wing party leader said, in an Israeli Channel interview, on Friday, January 15, that:

“As far as I’m concerned, these entities are not [exercising] freedom of expression — it’s greed. They aren’t any different from Ehud Adiv or Mordechai Vanunu — they’re complete traitors.”

According to the Israeli media, Liberman’s remarks came amid a growing debate over a bill proposed by Israeli Justice Minister Ayelet Shaked, of the far-right Jewish Home party, requiring certain Israeli non-governmental organizations to publicly declare their foreign government funding.

The so-called NGO Law or Transparency Law would require all Israeli groups that receive half or more of their budget from foreign governments — which is true for many left-wing but few right-wing groups — to disclose their foreign benefactors.

“With all our desire to stay politically correct and be polite, there are things that need to be told as it is. There’s [cash] flow from the institutions most hostile to Israel. Not just the European Union, not just states. Also those same foundations that fund Hamas, they also fund B’Tselem and Breaking the Silence,” Lieberman added.

In the other hand, due to a lot of criticism from the Israeli media, former Israeli soldiers from Breaking the Silence said, in recent weeks, that they are only trying to expose the reality of Israeli military actions in the occupied Palestinian territories.

The group added that its mission is essential for stopping violence in the region, by helping to end the military occupation of the territories. Members of the organization are trying to draw public attention to issues which are not covered by Israeli media, and are not made public.

Last week, a fire broke out at B’Tselem’s office in Jerusalem. None of their staff were in the building, but people working on other floors had to be evacuated by the fire brigade.

According to its website, B’Tselem acts primarily to change Israeli policy in the Occupied Palestinian Territories and ensure that its government, which rules the Occupied Territories, protects the human rights of residents there and complies with its obligations under international law.