Palestinians Close the ICRC on Behalf of Al-Qeeq 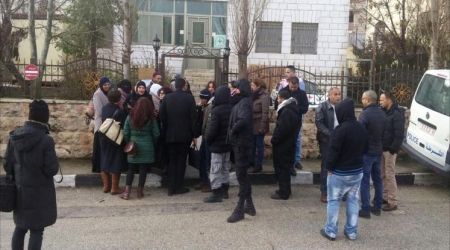 A group of Palestinian youth closed, on Monday morning, the headquarters of the International Committee of the Red Cross (ICRC) in al-Bireh, in protest against the international silence being displayed, with regard to the case of Palestinian hunger-striking journalist Mohammad Al-Qeeq.A collective statement by the group explained, according to Al Ray, that the closure is a protest against the international silence and the ICRC silence regarding the crime against Al-Qeeq. They called for ending Al-Qeeq administrative detention and for his immediate release.

They called the chairs of the ICRC in Jerusalem, Gaza and Tel Aviv to pay a visit to Al-Qeeq in Afula hospital, to witness the real facts and not rely on the report they received.

The statement called on the ICRC to inform the international community and pertaining ambassadors in occupied Palestine about the deteriorated conditions of Al-Qeeq.

The statement recognized the ICRC as a humanitarian organization which must meet its duties in connection with such a case, and not stand idly by while an Israeli crime is committed against Al-Qeeq and other 6,000 detainees.