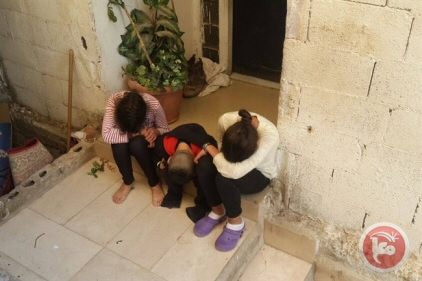 Israeli forces physically assaulted an entire family in the occupied East Jerusalem village of al-Isawiyya, overnight Sunday, after the family resisted during an arrest raid, the head of the village said.Darwish Darwish said that Israeli forces stormed the home of Tareq and Tahreer Darwish, with the intention of detaining the couple’s sons Yousef, 18, and Laith, 17.

The two teens, along with their father, resisted the detention, and Israeli forces attacked the three, beating them.

According to the mayor, the mother, Tahreer, 37, her daughter, Batoul, 14, and 2-year-old son Darwish all suffered from bruises and lacerations all over their bodies.

Israeli forces detained the entire family, including the toddler, after the assault. The family was detained while still barefoot and in pajamas, the mayor said.

Darwish added, according to Ma’an News Agency, that Israeli forces ransacked the family home, destroying valuables, before taking the family to a police station in the Sheikh Jarrah neighborhood of occupied East Jerusalem, and then transferring them to the Salah al-Din police station near Damascus Gate.

After four hours of detention, Israeli forces released the mother and her young son, but kept the rest of the family, including the 14-year-old daughter, under detention.

The 17-year-old son Laith is set to appear in Israeli court for a trial on Monday. The charges levied against him are unknown.

While the mayor shares a last name with the family, Darwish is one of the most popular surnames in al-Isawiyya village, and the family is not necessarily directly related to the mayor.