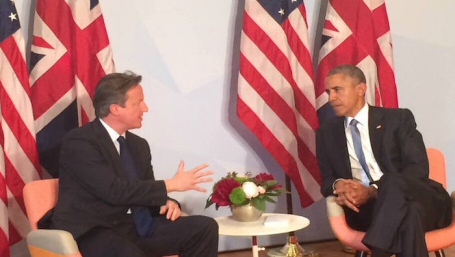 Trump also claims in the interview that his popularity and chance at being the Republican nominee, in the upcoming presidential election, are a result of U.S. citizens’ anger over the Obama administration’s weakness in conducting foreign affairs. Such weakness, Trump says, is dangerous for both the U.S and Israel.

The article maintains a positive tone, encouraging to its readers to hold onto the hope that one day Trump, a conservative friend of Israel, could rule international politics.

However, the article admits that, even under the Obama administration, which is seen as hostile in Netanyahu’s circles, Israel-U.S. relations continue, overall, as usual.

Dermer said that he believes, given the history of tension between Netanyahu and U.S. President Barack Obama, the relationship between the two nations is as strong as it can be – or, “good.”

This week, Israel and the U.S. have organized a joint anti-missile drill. Approximately 1,700 U.S. soldiers from the United States European Command and 1,500 Israeli soldiers from the Air Defense Command will meet to execute the drill.

Routinely practicing military exercises is a strategy to improve coordination between the two armies, and, especially for the Israeli security establishment, maintain strategic relations with the U.S.

Though Israel’s relations with the U.S. are unwavering, its relationship with the U.K., a key ally in NATO, is under some pressure.

Last week, British Prime Minister David Cameron said, at a session of Prime Minister’s Questions, that the U.K. government does not support illegal settlements, nor does it support Israeli policies in East Jerusalem.

Cameron stated, “I am well known as being a strong friend of Israel but I have to say the first time I visited Jerusalem and had a proper tour around that wonderful city and saw what has happened with the effective encirclement of East Jerusalem – occupied East Jerusalem – it is genuinely shocking.”

Responding to Cameron’s comments, Netanyahu became defensive. At a Likud party conference in Ofakim, the Netanyahu said, “my friend David Cameron, who is undoubtedly a friend of Israel, probably forgot some basic facts about Jerusalem.”

Netanyahu warned, “only Israeli sovereignty is preventing ISIS and Hamas from setting fire to the holy sites in the city, like they do elsewhere across the Middle East.”

The Israeli and German governments, on the other hand, held a friendly meeting in Berlin in order to enhance the two countries’ relationship. However, what should have been a moment of good publicity for Netanyahu was overshadowed by Sara Netanyahu’s personal affairs.

However, the political significance of the meeting approached irrelevance in Israeli media, as it focused on reports that the wife of the prime minister refused to fly to or from Berlin on the same plane as Israeli Justice Minister Ayelet Shaked.

Shaked allegedly agreed to travel on a commercial airliner instead of joining the delegation on the official flight.

Sara Netanyahu is frequently covered by Israeli media, usually on the extravagance of her lifestyle and concerns that she maintains it by charging outsized expenses to state coffers.

For Netanyahu, a Trump victory in the U.S. presidential elections could solve both of the problems that emerged around Israel’s international affairs this weekend: not only would Trump likely bring about the end of Israel’s growing international isolation, but also Trump’s unabashed taste for luxury could re-frame the Netanyahu family’s lavish lifestyle as acceptable for public officials – or, at least, less newsworthy.