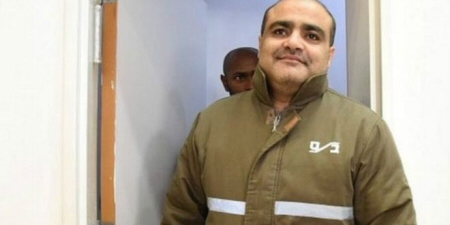 Israeli authorities must ensure that the trial of a detained humanitarian worker employed by the charity “World Vision” is fair and open, said Amnesty International on the eve of his trial, amid reports that the proceedings are due to take place in secret.

Mohammed al-Halabi, the manager of Gaza operations for the child-focused global development NGO, is facing 12 charges including being a member of a “terrorist organization” and siphoning off the charity’s funds for “terrorism” purposes.  He was initially denied access to a lawyer, according to the PNN, and, when she was eventually allowed to meet him, he alleged that he had been seriously mistreated in custody.

The lawyer is prevented from disclosing the details of that allegation, as well as many other elements of the case, by a set of severe restrictions imposed by the Israeli authorities on reporting around the case.

“Secret trials are the most flagrant violation of the right to a public hearing. Holding these court proceedings behind closed doors would render any convictions obtained unsound,” said Magdalena Mughrabi, Deputy Director of the Middle East and North Africa Programme at Amnesty International.

“The allegation of stealing money intended to help alleviate the humanitarian crisis in Gaza is extremely serious. This makes it all the more pressing to ensure that Mohammed al-Halabi’s rights are fully respected and that his trial be fair and transparent.”

According to international standards, trials can be held in secret only in exceptional circumstances. While grounds of national security may exceptionally justify closing some or all of a trial, the Israeli authorities have not put forward a case to explain why such conditions are necessary for this trial.

Israel’s security agency arrested Mohammed al-Halabi on the 15th of June, at the Erez crossing between Israel and occupied Gaza, while he was on his way back to his home in Gaza from a meeting at World Vision’s office in Jerusalem. He was transferred to a detention centre at Ashkelon, Israel, where he was interrogated before being moved to Nafcha prison, in the Negev desert.

It has also been reported in the media that he was severely beaten and his ‘confession’ to stealing 7.4 million USD a year was obtained under duress. This appears to be a dubiously high figure, given that according to World Vision, Mohammed al-Halabi and other managers in his position only have the authority to authorize spending up to a maximum of 15,000 USD of the budget at a time and the organization’s total Gaza budget for the last decade was approximately 22.5 million USD.

“The Israeli authorities must immediately investigate the allegations that Mohammed al-Halabi was mistreated in custody and may have been forced into ‘confessing’ under duress. Any evidence obtained through torture, or other cruel, inhuman or degrading treatment must be excluded from proceedings. Without independent and impartial investigations into these allegations the trial risks being fundamentally flawed,” said Magdalena Mughrabi.

Between 2001 and 2016 the Israel Security Agency has been named in almost 1,000 complaints of torture and other ill-treatment, but no criminal investigations have been opened.

Amnesty International has also learned that Israeli authorities have imposed severe reporting restrictions on Mohammed al-Halabi’s case. His lawyer said that the restrictions were exponentially more severe than any she had seen in her more than forty years of experience.

Israeli authorities have also made a number of statements that risk prejudicing the course of justice. For example, a Ministry of Foreign Affairs statement treated as fact the allegations that Mohammed al-Halabi is a member of Hamas, and stole 7.4 million USD a year.

“The Israeli authorities must cease all statements that could prejudice the outcome of the trial. Reporting allegations as fact is a violation of the presumption of innocence,” said Magdalena Mughrabi.

Mohammed al-Halabi has worked for World Vision since 2005 and was promoted to head of its operations in the Gaza Strip in 2014. World Vision has launched an independent investigation into the allegations and suspended its humanitarian work in Gaza following his arrest. Several governments have announced the suspension of their funding to World Vision’s projects in the Occupied Palestinian Territories pending the outcome of the investigation.

Since 2007, Israeli forces have maintained an air, sea and land blockade of the Gaza Strip, which has severely restricted the movement of goods and people into and out of Gaza, and amounts to collective punishment. Egypt has also largely kept shut the border crossing in Rafah in recent years. The blockade and a series of armed conflicts between Israel and Palestinian armed groups in the last decade have left nearly 80 percent of Gaza’s population dependent on international humanitarian aid.

“The welfare of most of the civilian population in Gaza depends on effective delivery of humanitarian assistance. It is crucial that this case does not in any way impact the ability of humanitarian and development organizations such as World Vision to be able to carry out their vital work free from arbitrary restrictions, harassment or intimidation,” said Magdalena Mughrabi.