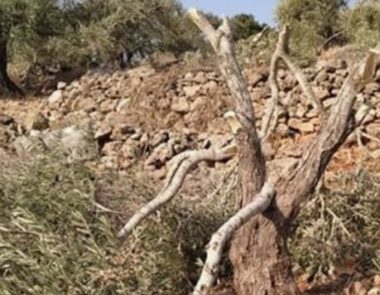 Hassan Breijiyya,  the head of the National Palestinian Committee against the Annexation Wall and Colonies in Bethlehem, said the assailants uprooted 50 fruitful trees, owned by a local farmer, Mahmoud Sa’d.

Breijiyya noted that such attacks and violations are very frequent, and include assaulting farmers, burning trees, and flooding the lands with wastewater.

“While the Palestinians are working hard to contain and eliminate the spread of Coronavirus, especially in Bethlehem, illegal Israeli colonists are taking advantage by assaulting farmers and their lands,” he added.

He also said that, over the past three weeks, more than 1200 olive trees in the towns of al-Khader and Wadi Fukin, near Bethlehem, have been uprooted by armed colonial Israeli settlers.

Israel’s ongoing occupation of Palestine, including East Jerusalem, and its colonies across the territory, are illegal under International Law, the Fourth Geneva Convention, in addition to various United Nations and Security Council resolutions.