Army Abducts Eleven Palestinians In Tulkarem, Jenin And Bethlehem, Injure One In Qalqilia 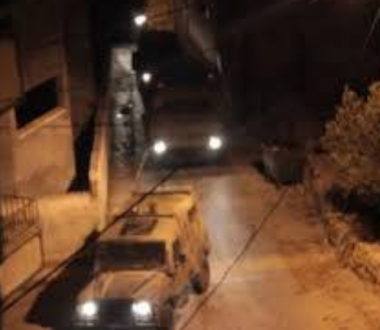 Israeli soldiers invaded, on Wednesday at dawn, many Palestinian communities in the West Bank governorates of Tulkarem, Jenin and Bethlehem, stormed and ransacked many homes and abducted eleven Palestinians, in addition to wounding one in Qalqilia, and causing many others to suffer the effects of teargas inhalation.

The Tulkarem office of the Palestinian Prisoners Society (PPS), in the northern part of the West Bank, said the soldiers invaded Atteel town, north of the city, broke into dozens of homes and interrogated many Palestinians, before abducting six.

Furthermore, the soldiers invaded homes in Qabatia town, south of the northern West Bank city of Jenin, abducted Yousef Nimir Khozeimiyya, 60, and his son ‘Ala, 24, after breaking into Yousef’s home looking for his nephew, Yasser.

The soldiers also abducted another Palestinian, identified as Rida Ahmad Turkman, 22, and withdrew from the town, taking the abducted Palestinians to an unknown destination.

In addition, the soldiers broke into many stores in Barta’a town, isolated behind the Annexation Wall, south of Jenin, and violently search them, causing damage.

Also, the Bethlehem office of the PPS said the soldiers abducted Omar Ahmad al-‘Amour, 24, from his home in Teqoua town, east of the city, while Nidal Ali Affana, 20, from Aida refugee camp, north of Bethlehem, was abducted a the Container military roadblock, northeast of Bethlehem.

In related news, several army jeeps invaded Qalqilia city, in northern West Bank, and clashed with dozens of youngsters, who hurled stones and empty bottles at the military, after the soldiers stormed and ransacked many homes.

Local medics also provided many Palestinians the needed treatment, due to the severe effects of teargas inhalation.

In the Gaza Strip, Israeli navy ships opened fire on many Palestinian fishing boats, in the northern part of the coastal region, forcing the fishers back to shore.