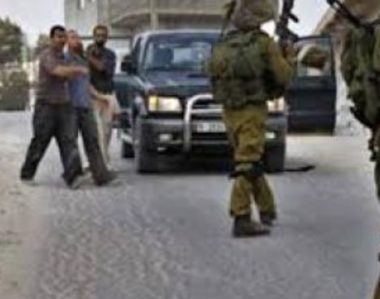 Israeli soldiers abducted, on Thursday at dawn, four young Palestinian men from their homes, in several parts of Bethlehem governorate, south of occupied Jerusalem in the occupied West Bank.

The Bethlehem office of the Palestinian Prisoners’ Society (PPS) has reported that the soldiers invaded and searched many homes in Doha town, west of Bethlehem, and abducted two Palestinians, identified as Mohammad Adnan Malash, 23, and Mos’ab Sobhi al-‘Azza, 25.

It added that the soldiers also searched homes in the al-Khader town, south of Bethlehem, and abducted Islam Ahmad Salah, 30.

It is worth mentioning that the soldiers stormed the home of a political prisoner, identified as Mohammad Sobhi al-Azza, and hurled gas bombs and concussion grenades inside the property, causing the family to suffer the severe effects of teargas inhalation.