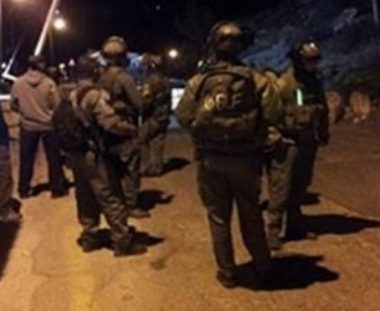 Israeli soldiers abducted, on Wednesday at dawn, ten young Palestinian men from their homes, in several parts of the occupied West Bank.

The soldiers invaded Ras al-‘Ein area, in the northern West Bank city of Nablus, before storming the local Power Company, and abducted a young man, identified as Roshdi al-Qayyim.

The soldiers also fired many gas bombs, concussion grenades and rubber-coated steel bullets at local youngsters, who hurled stones at them while invading the city.

In related news, the soldiers released Jamal Qadous and Ahmad Faqeeh, who were abducted from Iraq-Burin village, south of Nablus, on Tuesday evening.

The soldiers claimed the two hurled stones at them, while local sources said the two were just in the area, and that Qadous cannot walk due to polio since he was a child.

In addition, the soldiers invaded Sorra town, west of Nablus, and fired dozens of concussion grenades before withdrawing.

In Ramallah, the soldiers invaded the al-Jalazoun refugee camp, north of the city, searched homes and abducted Mohammad Hasan Oleyyan.

It is worth mentioning that Mohannad’s brothers, Ra’fat, 18, and Hamza, 16, were abducted by the soldiers three days ago, also from their home, in the al-Jabal area, in the opposite direction of Solomon Pools in the town.

In related news, several fanatic Israeli colonialist settlers infiltrated into Far’ata town, east of the northern West Bank city of Qalqilia, and punctured the tires of five parked cars, in the eastern area, near the illegal Gilad colonialist post.