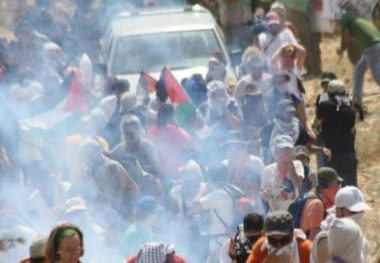 The procession started in the afternoon hours, when many locals, and the peace activists, marched towards the Annexation Wall and the isolated Palestinian lands, especially olive orchards, before the soldiers attacked them.

Mohammad Amira, a member of the Popular Committee against the Wall and Colonies, said the soldiers resorted to excessive force against the nonviolent protesters, and fired many gas bombs and concussion grenades.

He added that the soldiers chased many protesters in olive orchards, after firing gas bombs and concussion grenades at them. There have been no reports of injuries or abductions.

Today’s procession also came in condemnation of the Balfour Declaration, which was issued by Britain 100 years ago, and demanded the UK to stop the celebration of this declaration.

Also on Friday, several extremist Israeli colonists attacked a Palestinian farmer on his land, in the Sakout area, in the West Bank’s Northern Plains.

Majdi Odah, the head of the Department of Agriculture in Tubas, said the soldiers assaulted Zamel Daaghma, while working on his land, near the border with Jordan.