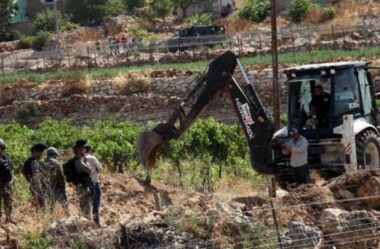 Hasan Breijiyya, the head of the Bethlehem office of the Wall & Colonization Resistance Commission, stated that the Israeli soldiers, accompanied by bulldozers, invaded the Khallet an-Nahla area near Wad Rahhal, before bulldozing and uprooting 10 Dunams planted with olive saplings.

He added that the uprooted orchards are owned by a local farmer, identified as Ibrahim Obeyyat.

In addition, the soldiers demolished the foundations of an under-construction home and several retaining walls in the same area.

Breijiyya denounced the escalating Israeli violation and said they are all part of Israel’s ongoing attempt to build and expand its illegal colonies on stolen Palestinian lands.