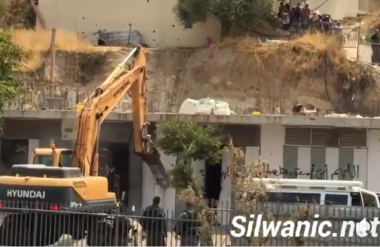 Israeli soldiers invaded, Wednesday, Silwan town, south of the Al-Aqsa Mosque in occupied Jerusalem, and demolished four stores owned by a Palestinian, identified as Mohammad al-Abbassi, and abducted one child.

The Wadi Hilweh Information Center in Silwan (Silwanic) said dozens of soldiers, including undercover officers, and the police, invaded Abu Tayeh neighborhood, in Ein al-Louza area, in Silwan, after surrounding and isolating it.

Silwanic added that the soldiers then demolished the four stores, under the pretext of being built without permits.

The soldiers also assaulted many Palestinians before, during and after the demolitions.

It is worth mentioning that al-Abbassi was only informed of the demolition orders a day ago and started removing their contents with the help of his family.

Furthermore, the soldiers abducted a child, identified as Ali Taweel, 15, from Wadi Hilweh neighborhood, and took him to an interrogation facility in the city.