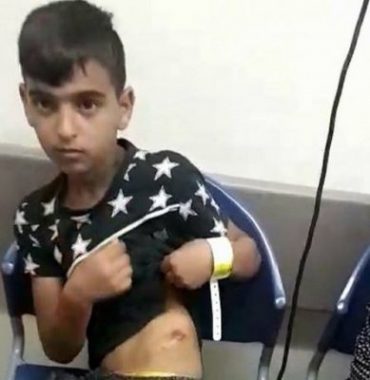 Mohammad Abu al-Hummus, a member of the Follow-Up Committee in al-‘Isawiya village, in occupied East Jerusalem, said the soldiers injured, throughout the day Monday, several Palestinian schoolchildren, in the village.

The wounded children were moved to several hospitals and clinics, in the town and in Jerusalem, suffering various wounds, mainly to the face, limbs and abdomen.

Abu al-Hummus added that one of the wounded children was later transferred from al-Makassed Hospital to Shaare Tzedek Medical center, due to the seriousness of his condition. The families in the town, including the students’ parents committee, decided to suspend classes in all schools in the town until further notice, demanding an end to Israel’s ongoing military invasions, especially since the beginning of the new school year, and the army’s provocative acts targeting the students.

Abu al-Hummus denounced the ongoing and escalating invasions, and called on the international community to intervene, especially since the soldiers constantly attack the students, and fire gas bombs, concussion grenades and rubber-coated steel bullets.

The residents said that the invasions are carried out under several vague Israeli allegations, and only aim at placing further challenges and difficulties in the daily lives of the residents, especially the children.