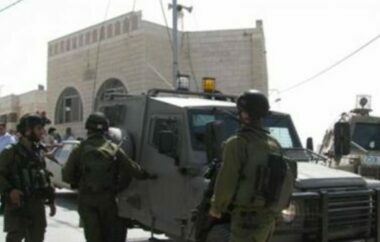 Israeli soldiers invaded, Friday, a mosque near Jaba’ town, south of the northern West Bank city of Jenin, before preventing the Palestinians from praying in it, and stopped rehabilitation work that is ongoing in the holy site.

Razi Ghannam, the secretary of the Fateh movement in Jaba’, said the soldiers stormed the mosque and forced the Palestinians out, in addition to stopping the rehabilitation work that was being conducted in the holy site.

Ghannam added that the soldiers also fired many rubber-coated steel bullets and concussion grenades around the mosque, and near Jenin-Nablus Road, to force the Palestinians away.

It is worth mentioning that the mosque and its surrounding areas have been subject to escalating Israeli violations, including the repeated attempts by illegal colonists who are trying to occupy it.