Army Seriously Injures A Palestinian, Causes Fire In A Home, In Hebron 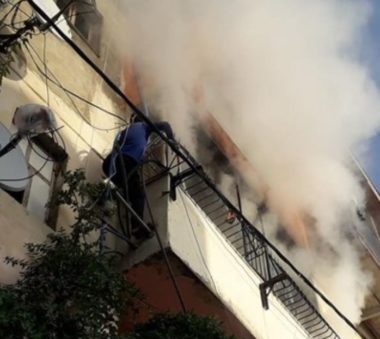 Israeli soldiers invaded, on Wednesday evening, the al-Arroub refugee camp, north of the southern West Bank city of Hebron, and shot a young man with a live round in his knee, leading to a serious injury after a severe blood loss, and caused a fire in one home after firing concussion grenades into it.

Medical sources in Hebron said the soldiers attacked many Palestinians, who protested the invasion into their refugee camp, and fired live rounds, gas bombs, concussion grenades and rubber-coated steel bullet at them.

They added that a young Palestinian man was shot with a live round in the knee, causing severe bleeding, before he was rushed to a local hospital, where his wounds were described as serious.

The soldiers also fired concussion grenades into a home in the refugee camp, causing a fire to the property, before Palestinian firefighters rushed to extinguish it.

The invasion into the refugee camp was carried out by the soldiers during a procession in condemnation of the killing of Omar al-Badawi, 20, who was shot by Israeli army fire, Monday, although he posed no threat to the soldiers and wasn’t even taking part in any protest.