Army To Demolish A Palestinian Home, Abduct A Woman, In Jerusalem 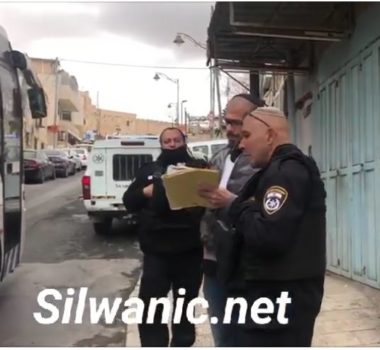 Israeli soldiers handed, on Monday evening, an order for the demolition of a Palestinian home in Silwan town, south of the Al-Aqsa Mosque, in occupied East Jerusalem, and abducted a woman while leaving the holy site.

The soldiers handed the order to the home owner, Issa Ja’afra, informing him that his property will be demolished on January 27th, for “being built without a permit.”

They informed him that he can avoid the high fines and fees, if he demolished his home at his own expense before that date.

There are eight family members, including five children, living in the 70 square/meter home.

In 2016, the army demolished the family’s former home under the same allegations.

Besides the excessively high costs of obtaining permits from Israel, the Palestinians are almost always denied construction permits, including permits for modifying their properties or adding rooms to them.

This is happening while Israel continues the construction and expansion of its illegal colonies, in direct violation of International Law and the Fourth Geneva Convention.

Also in Jerusalem, the soldiers abducted a Palestinian woman, identified as Montaha Emara, as she was leaving the Al-Aqsa Mosque.

In related news, the soldiers handed Jawad Siyam, the director of Wadi Hilweh Information Center in Silwan (Silwanic), an order to head to the City Council for questioning.

Furthermore, an Israeli court, sentenced Mohammad Nidal ar-Razem, 22, from Jerusalem, to 54 months in prison, and a fine of 10.000 Shekels. The young man was taken prisoner on July 2nd, 2018.