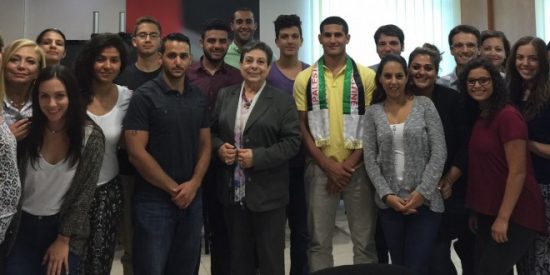 PLO Executive Committee Member Dr. Hanan Ashrawi met with a visiting delegation of young Palestinians from the United States participating in the American Federation of Ramallah, Palestine’s Project Hope program, at the PLO Headquarters in Ramallah.

After welcoming the delegation to Palestine, Dr. Ashrawi urged its members to stay engaged, remain connected with their homeland and cause, and to be proud of their heritage, history and culture. She stressed,  according to the PNN, that “Palestine needs the spirit, energy and imagination of the youth. We are united in our collective identity and our aspirations for the future.”

In that context, Dr. Ashrawi said, “The political system and all institutions in Palestine need to be rejuvenated and reformed. The rift can no longer continue; the Palestinian people deserve a legitimate system of good governance.”

The discussion focused on Israel’s systematic violations of international law, including its grand theft of Palestinian land, resources, narrative, and history. Dr. Ashrawi said, “With the daily injustices and grave atrocities being inflicted on the Palestinian people, Israel is behaving as a rogue state that acts above and outside the law.”

In light of the preferential treatment, legal cover and military aid that Israel receives from official U.S. administration and Congress, Dr. Ashrawi called on the young meeting participants “to stand up, speak out and to make a difference in the U.S.” She added, “Whenever possible, return home.”

Dr. Ashrawi also answered questions on Palestinian moves in the international arena and the importance of the international community holding Israel accountable for its violations and actively working to end the occupation, and to bring about the free and sovereign state of Palestine.