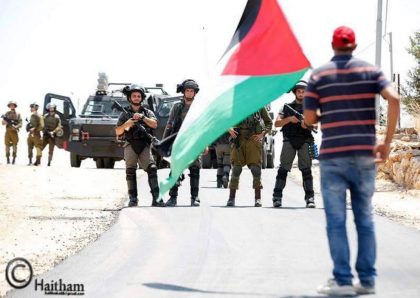 On friday, many Palestinians from Bil’in village, west of the central West Bank district of Ramallah, held the weekly nonviolent protest, accompanied by Israeli and international peace activists.

Approximately thirty Palestinians, and ten Israeli and international activists marched from the center of the village, heading towards Palestinian orchards, while the soldiers were deployed in some orchards, and in the mountain overlooking the village and its lands.

Ashraf Abu Rahma, a nonviolent solidarity activist and a cameraman from Bil’in, told the IMEMC that the villagers are demanding the removal of the illegal wall, and unrestricted access to their lands, their own orchards, isolated behind this wall.

“The army keeps claiming our lands are closed military zones, but they are ours, and we have the right to enter them,” Abu Rahma said, “I saw the soldiers heavily armed, and we are unarmed and marching peacefully – our only weapon is the camera that documents their violations.”

“We hear about Human Rights, and organizations defending those rights, but we denied basic rights under this illegal occupation,” Ashraf said, “The occupation is the root of all violence, we are unarmed, and we struggle peacefully – we want to live in our state, and will remain steadfast until liberation.”

“We hold weekly protests in Bil’in, in our lands, and they [the soldiers] keep claiming the lands are a closed military zone” Ashraf said, “We want liberation and independence — we hold our nonviolent protests against the illegal annexation of our lands, colonies, this apartheid wall, and the ongoing occupation.”

Although the soldiers were extensively deployed around the village, and in the Palestinians orchards, there has been no reports of army fire.