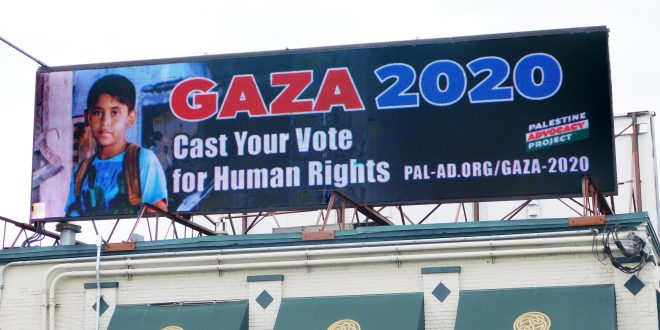 Palestine Advocacy Project has launched two billboard ads calling upon American voters and the next President of the United States to end U.S. funding for Israeli human rights violations, and restore humanitarian aid to Palestine, the Palestine News Network reported.

In 2015, the United Nations warned that Gaza could become “uninhabitable” by 2020 as a result of Israel’s blockade of and periodic wars on Gaza, which are in flagrant violation of international human rights and humanitarian law.

2020 has arrived, and Gaza’s approximately 1.8 million inhabitants sit on the brink of systemic collapse without adequate medical supplies, clean water, or electricity.

“As Americans and people of conscience, we cannot accept our government’s ongoing attacks against Palestinian human rights and basic liberties. That’s why we demand the Democratic Party and its nominee for President take a stand for Palestinian rights and reverse decades of inhumane policy that have culminated in the horrors of the Trump presidency.”