Child Injured during Raid by PA Security Forces near Nablus 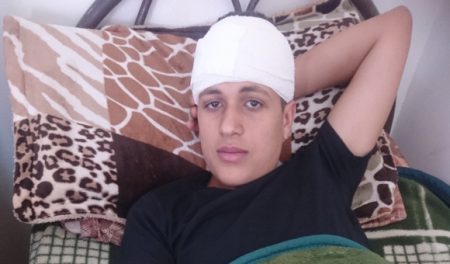 Mohammad Hashash, 15, was injured by shrapnel from an unknown source during a Palestinian security forces raid on Balata refugee camp on June 4. (Photo: courtesy of Hashash family)

Mohammad Samir Hashash, 15, suffered a head injury on June 4 during clashes between Palestinian security forces and armed residents of Balata refugee camp, east of the West Bank city of Nablus.

Defense for Children International – Palestine has now confirmed that one child sustained a shrapnel injury to his head during a Palestinian security forces night raid on Balata refugee camp last week that turned violent, as armed residents opened fire on Palestinian security forces. Initial media reports stated that two camp residents were injured, identifying one as an adult. Mohammad was released after initial hospital care with shrapnel still lodged in his head, and was scheduled to return to the hospital yesterday.

“As I stood at the doorstep, I felt something hit my head but I couldn’t determine the source,” Mohammad told DCIP in his sworn testimony. “I felt great pain in my head and went to the closest mirror and found my face was covered in blood.”

Shortly before, around 1:30 a.m., Mohammad heard heavy shooting that sounded to be approximately 60 meters (66 yards) away from his house, he told DCIP. When the sounds grew closer, Mohammad stood on the doorstep to see what was happening.

His father wrapped Mohammad’s head with a cloth and rushed him to Rafidia Hospital in Nablus city. The hospital provided first aid then transferred Mohammad to the Specialized Arab Hospital for further care.

A CT head scan revealed that Mohammad had three shrapnel fragments in his head directly under the skin, which had not penetrated his skull. Doctors informed Mohammad that they would assess whether to remove the shrapnel after the swelling in his head decreased.

Akram Rujoub, governor of Nablus, told local media that Palestinian security forces were “conducting a security operation” when gunmen in the camp began firing at them.

Both gun violence from armed residents of the camp and raids by Palestinian security forces have become frequent in Balata refugee camp. In August 2016, Palestinian forces launched a “massive security crackdown” including night raids and numerous arrests with the stated goal of clearing the camp of illegal weapons.

“Recurrent confrontations between Palestinian security forces and armed residents in Balata refugee camp are exposing children to the risk of injury and disrupting their sense of normalcy,” said Ayed Abu Eqtaish, DCIP’s Accountability Program director. “Children growing up in the camp deserve to go about their days and nights in safety.”

DCIP considers all individuals under the age of 18 to be children, in accordance with the Convention on the Rights of the Child.