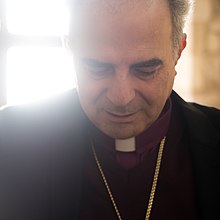 The Evangelical Lutheran Church in Jordan and the Holy Land (ELCJHL) has expressed deep concern over the recent U.S. declaration which recognized “the legitimacy” of the illegal Israeli colonial settlements in the occupied West Bank, The Palestinian News and Info Agency (WAFA) reported.

“The Evangelical Lutheran Church in Jordan and the Holy Land is deeply concerned with the United States Administration’s recent announcement, reversing its position on the building of settlements on Palestinian land,” said Bishop Sani Ibrahim Azar in a press statement.

“This reversal of a long-held commitment and understanding is in opposition to international law and consensus,” added Azar, and cautioned that “this change in U.S. policy endangers future negotiations toward a two-state solution and a Jerusalem shared by the three Abrahamic faiths.”

“As people of faith in a God of justice, peace, and equality, we must protect the rights and humanity of all people. As Palestinian Christians, we continue to stand steadfast in this land, strengthened by the hope we have through Jesus Christ,” the statement added.

Azar concluded by expressing his gratitude for the partnership and statements of churches, mosques and synagogues around the world who stand in solidarity with the Palestinian people during this time of great disappointment and uncertainty.