David Sheen — Emmett Till in Israel: How False Allegations of Rape Are Used to Lynch African Refugees and Palestinians (VIDEO) 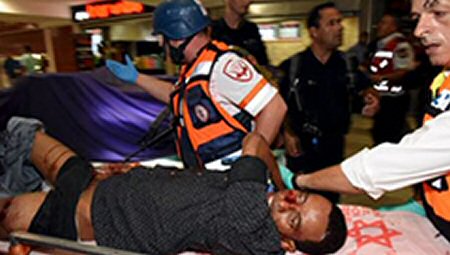 Is rape used as a political tool in Israel, to demonize and dehumanize Arabs and Palestinians? Last June, the Israeli public was shocked to hear of a girl with a mental disability, who was reportedly raped by a Palestinian, as an act of nationalistic violence. The girl has eventually confessed that her family pressured her to invent the rape, in order to have a Palestinian boy arrested. In December, the Israeli Committee for Women’s Rights, held a debate on sexual offences in joint Jewish-Arab communities. Now, the debate quickly deteriorated into incitement against Arabs.

In a recent piece in Electronic Intifada, David Sheen reported that among the political parties who organized the debate, is the Shas Party, which is described as a very religious, Jewish political party there. A senior member of the party, Amnon Cohen, has been arrested and was recently accused of receiving bribery, in the form of sexual favors. A woman testified that she was afraid for her life if she refused to have sex with the former member of the Israeli Parliament.

Today we’re joined by the author of the article, David Sheen. David is an independent journalist and a filmmaker, originally from Toronto, now living and reporting from the ground in Dimona, Israel. David has written for numerous publications, and he regularly speaks on U.S. College campuses, and in European Parliaments, about his work. Which focuses on racial tensions and religious extremism in Israeli society.

And David’s joining us today from Israel, David, welcome to The Real News.

DAVID SHEEN: Thank you for having me.

KIM BROWN: David, if you could, describe for us, what is the culture of rape, in general, and what does it mean in Israel?

DAVID SHEEN: Mm-hmm. Well, rape culture is a problem everywhere in the world that I know of. The places that I lived and visited where patriarchy, misogyny — where men controlled society, and view women and their bodies as fair game, as essentially, an extension of their own property. And this permeates culture. And it’s a problem in North America, and it’s a problem here in Israel.
Now, unfortunately, what we see is that in Israel, instead of the government saying, “This is a major problem, we need to work at reducing the amount of misogyny and the amount of rape culture and incidences of sexual harassment, and sex crimes.” Instead, what we have, is top members of the government committing these crimes. Top members of law enforcement, top members of the judiciary, top members of regional councils. And people in society like, university deans, and the head of the largest bank in Israel. The President of Israel! From… on rape charges.

So, we see that throughout the top levels of society, there’s serious, serious, serious sex crimes, and that sends a message to the rest of society. Well, you know, this is a normal way to act, and, sadly, the only time it ever gets mentioned by Prime Minister Benjamin Netanyahu, is if he thinks he can somehow blame rape on non-Jewish… non-white, non-Jewish people, specifically Palestinians, and African refugees, and other non-Jewish folk in the country.

KIM BROWN: So, given the fact that, as you said, rape is prevalent throughout the globe, and doesn’t necessarily tend to be exclusive to one particular society or the other, but the issue with rape is, that it is often under-reported. So, to your knowledge, what kind of data exists about the prevalence of sexual violence motivated by nationalism?

DAVID SHEEN: Mm-hmm. Well, this was the topic of the discussion in the Knesset, in December. And essentially, members of the Knesset were stating, “We have proof, in fact there’s a plague of Palestinian citizens of Israel, Arab men, who sexually harass and sexual assault women.”

Police representatives, representatives of the Israeli police force, which by no means are suspect of being pro-Arab, but they were (inaudible) …no evidence of this, you know? We talked to all of our local police forces and they reported back to us that they see no incidents. In fact, the level of sexual assaults in those mixed cities, where you have both Jewish and Palestinian populations, the amount of sex assaults there, is actually going down. That includes sex assaults in general, and sex assaults committed by non-Jews. That was the police statement.

And, in the article, the same thing happened five years ago. The last time that the right wing tried, once again to convene a Knesset session to blame non-Jews, police said no, “I’m sorry, we don’t have any evidence of some kind of concerted attack by Palestinian people, specifically trying to attack Jewish women, as a way to get revenge or to harm Jewish people, in the weakest link, you know, women, who are easy prey for sexual (inaudible) …evidence of any of this.”
It’s in the minds of racist lawmakers, and I don’t mind also saying, there are many groups in society, who their ostensive reason to exist is to prevent Jews and non-Jews, from being in romantic relationships. I know you had a film called, “Loving”, that came out in the United States just a few months ago, about the Supreme Court — Loving versus Virginia — how a white man and a black woman were not allowed to wed, just a few decades ago in the United States. It had to be a Supreme Court decision to overrule that.

It’s been pointed out that, in Israel, until this day in 2017, there’s no way for Jewish people and non-Jewish people to marry in the country. So, the incidences of Jews and non-Jews, deciding to live their lives together, is relatively rare to begin with. But even those few rare instances are… they make racists so angry… (inaudible) …groups to patrol streets in Israel, and beaches and public places.
And they get funds from the government to actively try to prevent romantic relationships between Jews and non-Jews. And these groups are the ones who put this idea out there that, “Oh, the only kinds of… the kinds of relationships are abusive and therefore we’re not… we’re trying to prevent these relationships to happen, because we’re trying to prevent abuse.”

But, the ultimate reason is, they want to prevent miscegenation. They’ve got a eugenics objective to have ethnic purity, and this is what they openly state. And, sadly, they receive government funds to try to make this manifest.

DAVID SHEEN: Sure. Sure. Look, there is no question that no one is going to claim that the crime rate of any group in society, is zero. Yes, there are rape crimes committed by Jews, non-Jews, Arabs, Africans, and that’s going to be the case, regardless. But, police themselves will say that refugees have a lower crime rate per capita, than native-born Israelis.

So, why then, is the focus on non-white, non-Jewish folk? Well, again, it’s a way to incite racism, and this is what we have seen for the last several years in Israeli society. And the way that this has become a factor — just look a couple of months ago in the city of… (inaudible), it’s a suburb of Tel Aviv — and the incitement is so great against refugees, and associating them with sex crimes, baselessly, I might add.

That now we can have an Emmett Till-like situation, where a refugee was walking down the street, right outside of City Hall, and he walked past a group — the reason why we know the details, is because since it’s outside the City Hall, there are cameras situated there — and so we saw CCTV footage of what actually happened.

So…(inaudible) …old black man just walking down the street, he sees three girls, three teenage women standing there, and you know, they’re, I don’t know, three feet, maybe five, six feet away from him. And he says something to them — you can’t tell, but whatever — it’s over in ten seconds. He walks away. Words are exchanged for ten seconds, and the man walks away.

So, on the pure… the accusation that a non-white, non-Jewish man spoke, to some non-Jewish girls, that was enough to set off a lynch. And since that time, the mayor of that city, instead of saying, “Wow, we’ve got to stop this racism.” Just the opposite, instead, he’s rounded up African refugees in the city, and he’s shut the electricity off to their apartments, to banish them from the city.

This is part and parcel of the way that (inaudible) …society, but it does speak to the greater phenomenon of also insinuating that non-Jews are sex criminals, and they should be treated as such.

KIM BROWN: And, David, in the piece that you wrote about this, you write about the, “Sex crime epidemic in Israel.” Why does Israel have such a high rate of sexual violence, in your opinion?

DAVID SHEEN: Well, it’s always difficult to actually measure sexual violence, because as many people have said, so much of it is unreported. So, is it rising, is it falling, or are people just talking about it more, they’re aware of it more? One thing is clear, in that, the attitudes around sexual violence are very problematic. Something like 61% of Israeli men do not think that raping someone who is an acquaintance is rape.

Somehow, they conceive of rape as only being a situation, I guess, where you’re hiding behind a bush, and you jump out at some complete stranger and then physically assault them. They only conceive of that as rape. The idea that someone you’ve met a couple… once or twice, and then you socialize with them and then rape them, that’s… they don’t think of that as rape. Which is, of course, it’s ridiculous. It’s rape in every single way.

But, that really speaks to the overall, overarching problem, of how sexual violence is categorized, and even understood and acknowledged, in society. So, that being the case, the message has to come from up top.

Yeah, the problem is that we do not have leaders… and when we have mayor, after mayor, after mayor, who are going to jail for sex crimes. Then yeah, we have a message from up top: that women are for the taking, and unless we have a message from the government saying, “This is a national emergency. We need to snuff this out. We need to condemn this, and make clear to our men folk, that women’s bodies are not yours for the taking. And assaulting anyone, whether you don’t know her or whether you know her, whether you’re going to ever know her, that’s a crime and don’t even think about doing it.”
We need to have that kind of messaging. Unfortunately, the message comes from the top as we hear in Israeli society, the (inaudible) so-called, which means the… (inaudible) …rest in Hebrew, and that command your spirit is, that women’s bodies are for the taking. Until we see a change from the leadership, from Prime Minister Benjamin Netanyahu, we can expect this sex crime epidemic to continue.

KIM BROWN: We’re going to take a quick break right now. We’ve been speaking with journalist, author and filmmaker David Sheen. He has been reporting on the issue of rape culture in Israel. Also how racism impacts Israeli society.

Stick around for Part 2. You’re watching The Real News Network.